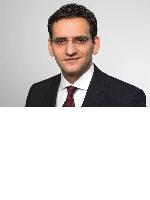 Orçun Kaya
Analyst
orcun.kaya@db.com
www.dbresearch.com
Deutsche Bank Research Management
Stefan Schneider
Trading volumes in foreign exchange instruments have increased significantly across the board in 2019 compared to the last global FX survey three years ago. Surprisingly, the pivotal role of London as the main trading location was reconfirmed, despite fears around the impact of Brexit. Yet a general move to central clearing might challenge this after the UK leaves the EU.
Since 2001, liquidity in the foreign exchange (FX) market, the largest financial market globally, has been growing by around USD 1 tr in each triennial survey conducted by the Bank for International Settlements. 2016 was an exception with a small decline, but in April 2019, FX trading converged back to its long-term growth trajectory and increased by USD 1.5 tr to USD 6.6 tr per day. Among different FX instruments, the largest uptick was observed in FX swaps whose daily trading volume rose to USD 3.2 tr. Of this amount, around 75% had a maturity of less than one month. Trends in spot transactions usually go hand in hand with global macroeconomic conditions and central bank policies.[1] Thanks to a favourable macro backdrop from 2016 to 2018 as well as recent expansionary monetary policies, FX spot trading climbed to USD 2 tr a day, albeit still a slightly smaller figure compared with 2013. Regarding trading counterparties, the general trend persisted in this survey wave, too: reporting dealers lost market share (3 pp decline since 2016) and other financial institutions gained market share (4 pp rise). Turning to currency composition, the USD continues to reign supreme with 88% of FX trades having the USD on one side, followed by the EUR with 32%. The Renminbi, Hong Kong Dollar and Korean Won have a combined market share of 10% only.
London pivotal for FX trading 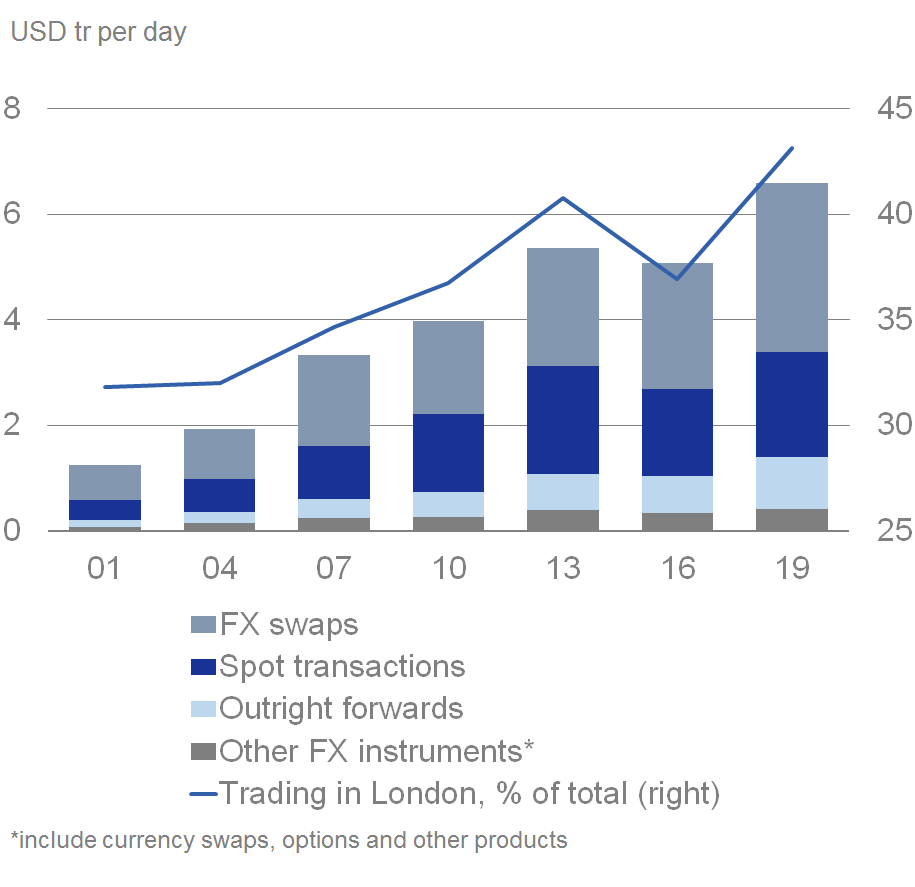 Sources: BIS, Deutsche Bank Research
In terms of the trading location, London surprised. Despite fears around the potential detrimental impact of Brexit, the share of FX trading in London rose by 6 pp to 43% of the total – the highest share ever. Trading in the US fell 3 pp to 17%, thus converging back to the average trading volume in the US since the 90s. With a market share of some 8% (+1 pp), the role of Hong Kong continued to increase slowly. Together with Singapore, trading in Asian financial centres accounted for 15% of the market.
The 2019 wave underlines that London will remain the single most important location for FX trading in the near future, thanks to the over-the-counter and bespoke nature of the FX market where trading in a single hub offers advantages. However, a move to central clearing might challenge London’s role. To date, and unlike interest-rate or credit derivatives, central clearing of FX derivatives has been negligible. I.e. only 3% of outstanding contracts were centrally cleared in 2018. Over time though, FX clearing might also gain traction as 1) an increasing share of FX market liquidity comes from other financial institutions, 2) automated trading becomes an integral part of the market. Other financial institutions are usually end-users with a regional focus that aim to hedge their cross-border positions. A growing share of smaller players together with more and more automation and electronic trading will probably push the FX market towards greater standardisation. While standardisation makes central clearing possible in the first place, economic incentives of clearing over non-cleared instruments, i.e. a preferential capital treatment of centrally cleared instruments (for both reporting dealers and smaller banks) might lead to higher clearing volumes.
Central clearing in general has gained a lot in importance in recent years. But the location of central clearing houses where euro-denominated instruments are cleared has become a political battlefield since the Brexit referendum. The EU-27 has been advocating for the relocation of euro clearing (primarily of interest-rate derivatives) from the UK to one of the euro-area countries and is debating a location requirement. If euro-denominated derivatives clearing leaves London either due to supervisory pressure or voluntarily by market forces, this might also lead to a relocation wave for FX instruments. Clearing houses in London only have a third-party status for example for instruments that have USD in one leg and EUR in the other. In case of a broader relocation, other currencies such as those from emerging markets might move elsewhere as well. Moreover, unlike interest-rate and credit derivatives which usually have much longer maturities, the short maturity of FX derivatives would support a potential transition. Put differently, as there is no need for novation or grandfathering of short-term contracts which will anyway expire within a month, trading might move to other locations more smoothly. During this transition, Asian financial centres might benefit disproportionately. They have been gaining importance already, most of all in trading of their own currencies. All in all, while London is the indisputable centre for FX trading today, the changing market structure and a move to central clearing might challenge its market share after Brexit.
[1] See Moore, M. J., Schrimpf, A., and Sushko, V. (2016), Downsized FX Markets: Causes and Implications, BIS Quarterly Review, December, for a detailed discussion.
Online Document "PROD0000000000446945" not found.
6.4.1