ContinueCancel
Advanced Search


The grass is always greener on the other side: Europeans more EU-sceptic than non-Europeans
Barbara BoettcherJakob Lahrsow
The European project has had some ups and downs but the extent of European cooperation is unique in history.
Region
Europe
Periodical
Chart in Focus
PDF 92K

The grass is always greener on the other side: Europeans more EU-sceptic than non-Europeans 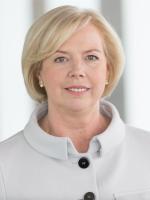 Jakob Lahrsow
jakob.lahrsow@db.com
www.dbresearch.com
Deutsche Bank Research Management
Stefan Schneider
The European project has had some ups and downs but the extent of European cooperation is unique in history. This is why the outsiders’ view on the European Union is even more interesting. 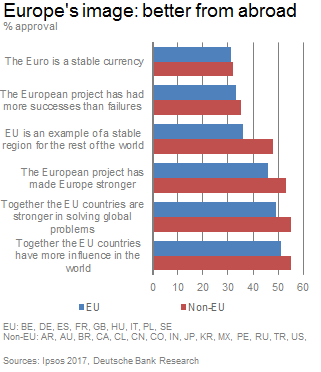 A survey from March 2017 by Ipsos, an opinion research institute, sheds some light on how European integration is valued in nine EU member states compared to 16 non-European countries.1 The results show that the EU is assessed more positively by non-Europeans than by European citizens. The share of Europeans, for example, who think that the EU is a model of stability for the rest of the world is 12 pp. smaller than the share of respondents in non-European states. Altogether, in only one of the six questions did the majority of EU citizens answer “EU-positive”.
Likewise, more than half of non-Europeans but only 46% within Europe agreed with the statement that European integration has made Europe stronger. Approval rates differed less on the question of whether the European project has had more successes than failures in the last 60 years: A relative majority both within the European Union (33%) and in non-European countries (35%) thought the successes were dominating, when taking the “neither/nor-answers” into account.
However, the share of respondents for which the failures dominate was significantly greater among Europeans (24%) than among non-Europeans (15%). This may be due partly to the fact that failed European initiatives and conflicts within Europe are hardly the focus of attention in non-European countries. Conversely, these failures are extensively covered in European media and are more directly seen and understood by the respondents.
A closer look at the data reveals that India, South Africa and the Latin American countries are particularly positive about the European Union whereas Northern Americans, Australians, Japanese and Russians tend to believe that Europe has not been strengthened. Results from China and South Korea are more or less in line with the average of non-European respondents. One reason for the positive image of the EU in many emerging economies may be the political and institutional stability of the European Union and its member states which seems desirable for citizens of countries with a less stable environment.
However, the sample of EU member states might also have influenced results: In two of the nine EU members, Poland and Hungary, euro-sceptical parties form the government, UK voted to leave the EU last year and especially in Italy the difficult economic development has weakened the support for the EU. Furthermore, the French presidential election campaign, which was running during the survey period (February-March 2017), and the anti-European positions of some candidates, could have affected results in France.
Original in German published on July 31, 2017: ˮAuf der anderen Seite ist das Gras grüner: Europäer EU-kritischer als Rest der Weltˮ
Online Document "PROD0000000000446945" not found.
6.7.5