Laura Rosenberger
laura.rosenberger@db.com
www.dbresearch.com
Deutsche Bank Research Management
Stefan Schneider
The mid-term review of the EU’s multiannual financial framework 2014-2020 is scheduled for the end of 2016. The scenario of a Brexit taking effect in the upcoming years and the potential impact thereof might well be discussed as part of the review. However, given current uncertainties about timing and circumstances of the UK leaving the European Union, it is still too early to fully adapt accounts. Yet, two things seem certain for the time being: First, a Brexit taking effect during the second half of the budgetary planning period would certainly prompt the need for further adjustments. Second, it would also affect funding for regional and cohesion policy as one of the largest EU budgetary items. 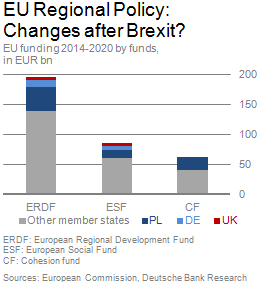 What implication of a Brexit on regional policy can be expected? Let’s start with the basics: The number of regions in an “EU27-UK” would be reduced. Based on the current classification, there would be 40 NUTS 2 level* regions less. Thus, a Brexit could affect the remaining regions via changes of the funding as well as the policy environment for applying regional and cohesion instruments.
The ceilings for common spending are defined as part of the EU’s multiannual financial planning. The financial resources dedicated to regional and cohesion policy are allocated to member states via the different funds based on their respective criteria. Altogether, regional and cohesion measures account for nearly one third of total planned spending (about EUR 349.4 bn) in the current financial framework 2014-2020. This amount is further divided between the different funds: nearly 57% are envisaged for the ERDF (EUR 196.3 bn), the ESF accounts for about one quarter (EUR 86.4 bn) and about 18% are budgeted for the cohesion fund (EUR 63.4 bn). In addition to these three instruments, there is a Youth Employment Initiative (YEI) with a total funding of EUR 3.2 bn.**
For these instruments and based on the planning period 2014-2020, about EUR 10.8 bn have been earmarked for the UK (approx. 3.1% of total funding). The country’s share of the individual funds varies considerably, reflecting the difference in policy focus and promotional targets. While the UK receives EUR 5.8 bn from the ERDF and EUR 4.9 bn from the ESF, it does not get support from the cohesion fund. The cohesion fund aims to promote convergence of member states with relatively less developed economies in the European Union. For comparison: Germany benefits by a total of EUR 18.3 bn from the structural funds (ERDF and ESF), a somewhat higher amount than the UK (i.a. due to larger population and additional funding for the regions of former East Germany) while Poland receives EUR 53.4 bn from structural funds and EUR 23.2 bn from the cohesion fund. In addition to the structural funds, the UK gets about EUR 206.1 m from the YEI program.
The exact timing of Brexit is going to be crucial for the effects on regional and cohesion policy. Beyond 2020, a new multiannual financial framework would have to be negotiated among the remaining member states anyway. But nevertheless, Brexit would affect the numerical threshold levels to qualify for structural and cohesion funds because the country and its regions would no longer be part of the averages which are used to define the eligibility. As a result, even if the basic criteria would remain unchanged, the group of beneficiaries could still shift. If the UK were to leave before the end of 2020, i.e. under the current financial framework, it is unclear what would happen to funding for signed and approved programs as well as related (national) co-financing at this point. These issues need to be addressed as part of the exit negotiations between the EU and the UK. Furthermore, a Brexit before 2020 would likely reduce the EU’s total available financial resources since the UK has been one of the net-contributors.*** This could negatively impact funds for regional and cohesion policy if shortages would not be compensated by additional payments from other sources. To that effect, a Brexit may well make budget negotiations - which have ever been tough - even more controversial in the upcoming years.
Original in German published on August 5, 2016: ˮEU Regionalpolitik: Anpassungsbedarf nach Brexit?ˮ
Online Document "PROD0000000000446945" not found.
7.0.5