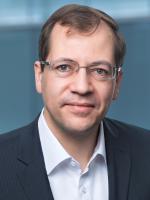 Jochen Moebert
Analyst
+49(69)910-31727
jochen.moebert@db.com
www.dbresearch.com
Deutsche Bank Research Management
Stefan Schneider
The unemployment rates of teenagers and young adults were already attracting attention during the financial and euro crisis. The corona crisis has again led to massive distortions on the labour markets in many countries. However, the initial development of the official youth unemployment rate was fairly diverse internationally. In some countries the unemployment rate has even fallen sharply.
Youth unemployment pre and post COVID-19 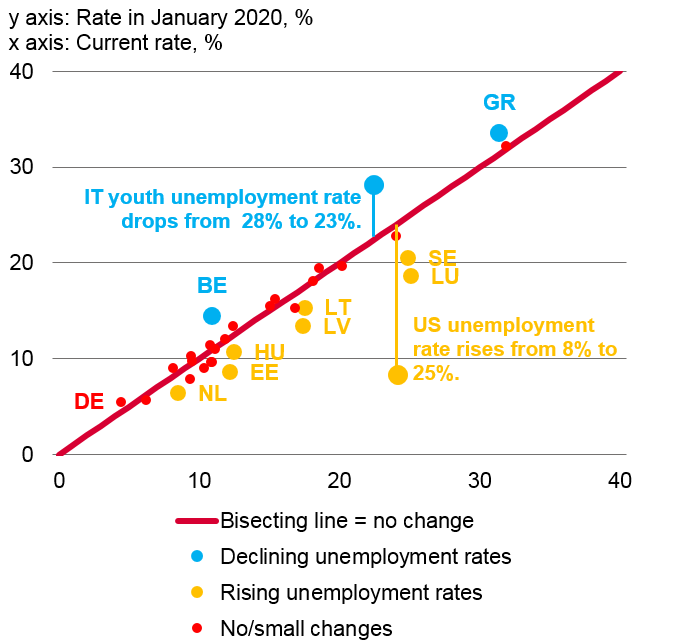 Sources: Deutsche Bank Research, Eurostat
Youth unemployment was already an important topic during the global financial and euro crises. There is widespread consensus among economists that the long-term income and job opportunities of young people (i.e. those below 25) tend to suffer from protracted career interruptions.[1] The coronavirus crisis has had a massive impact on the labour market in many countries. However, official youth unemployment figures are diverging considerably. According to Eurostat data, the biggest increase in unemployment took place in the US. The unemployment rate for workers below the age of 25 jumped from about 8% in January 2020 to currently more than 25%. During the same period, overall US unemployment rose from 3.5% to more than 14%. In contrast, youth unemployment in Italy has declined during the crisis, from about 28% to 23.5%. It seems that many young people simply stopped looking for work during the corona crisis, particularly since the labour market situation was already difficult before. As a result, the number of inactive people has risen considerably and the unemployment rate has declined. This applies to the overall Italian unemployment as well, which fell from more than 9% in January to less than 7% in April.
In most countries, youth unemployment has remained relatively stable thanks to very expansionary fiscal and monetary policies and short-time work schemes. While the number of those looking for a job may have declined in those countries as well, similar to developments in Italy, we suspect that this effect is minor for most countries (data for Germany, for example, are not yet available). For that reason, hopes appear justified that many young people will be able to keep their jobs, earn good wages in the long run and contribute to reducing the debt burden. In Germany, the labour market for young people seems to be quite resilient as well. Youth unemployment declined slightly from about 5.5% in January to currently 5.4%. This was and is the best figure of all countries included in the Eurostat database[2].
[1] See Möller, Joachim and Umkehrer, Matthias (2015). Are there Long-Term Earnings Scars from Youth Unemployment in Germany? Jahrbücher für Nationalökonomie und Statistik, vol. 235/4+5.
[2] Apart from Germany, Italy and the US, the database covers Austria, Belgium, Bulgaria, Cyprus, the Czech Republic, Denmark, Spain, Estonia, Finland, France, the UK, Greece, Croatia, Hungary, Ireland, Iceland, Italy, Lithuania, Luxembourg, Latvia, Malta, the Netherlands, Norway, Poland, Portugal, Romania, Slovakia, Slovenia, Sweden and Turkey.
.
Originalfassung in Englisch vom July 10, 2020: ˮJugendarbeitslosigkeit vor und nach Coronaˮ
Online Document "PROD0000000000446945" not found.
6.9.4