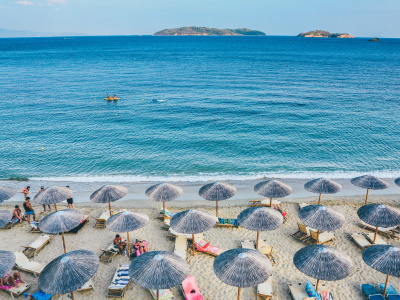 The spread of the delta variant will divert tourist flows in the 2021 summer season when individual holiday countries – such as Portugal recently – are classified as areas of variants of concern. However, delta is also likely to become dominant in Germany and other European countries in the near future. The question therefore arises as to how long the classification of countries with a high share of delta as areas of variants of concern can be justified. Ultimately, the classification into risk area and high incidence area might again be more reasonable. If a protection concept is lacking at schools after the summer vacations and delta leads to disruptions in school operations, this could influence the voting decisions of many people.

Virologists currently agree that the delta variant will become established in Europe in the coming weeks and months because it is more contagious than other variants of the coronavirus. This process is not synchronized within Europe. In some countries, delta has already dominated for some time. This includes the United Kingdom, where the share of the delta variant in new infections is now approaching the 100% mark. Rising shares have also been reported recently in Portugal and Russia. In addition, the number of new corona infections is increasing again here.
These figures on the delta shares are not equally reliable or meaningful. This is due to the fact that the countries examine the new infections with varying intensity for virus variants (genome sequencing). In addition, there are time delays between genome sequencing and the respective publication of the results. For example, the Robert Koch Institute (RKI), in its report on the virus variants from the end of June, reported the proportion of individual variants from about two weeks earlier, i.e. in mid-June. At that time delta came to a share of 37% in Germany. However, many virologists assume that the share has already risen to 50% and that delta will also become the dominant variant in Germany by July at the latest.

The question of where and how quickly the delta variant will take hold may have a significant impact on the 2021 travel season. The RKI had recently declared Portugal and Russia as areas of variants of concern. The classification of Portugal is initially valid for two weeks (since June 29). However, an extension is possible. Currently, when a country or region is classified as a virus variant area, the 14-day quarantine obligation on return from these countries also applies to fully vaccinated and recovered persons. It is not possible to end quarantine with a negative corona test. As a result, many vacation trips to Portugal have already been cancelled. Most of the holidaymakers who had been in Portugal when it was classified as an area of variant of concern cancelled their vacation prematurely. Under the current regulation in Germany, the classification of a country or region as a virus variant area is in practice tantamount to a travel ban, because very few tourists want to or are able to go into quarantine for 14 days after their return, especially if the persons concerned are fully vaccinated.
If the currently valid practice is enforced, those countries that are classified as an area of variant of concern at an early stage would be threatened with considerable losses in tourism revenue. This would be an economic catastrophe, especially for the specific vacation regions in the respective countries, as tourism often accounts for more than 50% of economic output in the region. Other countries, on the other hand, which officially have a lower delta share and low incidences, would benefit. This is because the basic desire to travel remains the same for most people who have decided to take a vacation (abroad). So, with the current regulation in place, delta will divert travel flows. There will be relative winners. At the same time, delta reduces planning certainty in the tourism industry in already uncertain times.
Of course, delta also affects the classic countries of origin in which the variant is or has become established early on, e.g. the UK. The entry requirements for such countries can be tightened; Portugal and Spain have recently done so, after holidaymakers from the UK had previously been able to travel to these countries without any requirements. Relatively harmless and justifiable entry requirements are vaccination or test certificates. However, if there is a quarantine obligation on entry,

Restrictions on the freedom to travel should always satisfy the criterion of proportionality. After all, free travel within the EU is a core element of European integration. For many people, this may even be the greatest achievement. However, the question of proportionality also relates to the economic consequences in the affected regions. From the German point of view, the (temporary) classification of Portugal as an area of variant of concern can be explained by the desire to slow down the spread of the delta variant by returning travellers. However, it is also clear that delta will prevail in Germany.
Ultimately, therefore, policymakers will have to ask themselves how long the classification of countries with a high share of delta as a virus variant area can be justified if delta is also (soon) the dominant variant in Germany. If classic vacation destinations are penalised, so to speak, for carrying out and publishing a lot of genome sequencing, the incentive to do so will decrease. Thus, the classification into risk area and high incidence area could make more sense again – i.e. looking at the actual incidence of infection, but also at hospitalisations. This should be combined with a testing obligation and controls of this obligation, for which many politicians have recently spoken out. Such an approach would also be justified by the progress made in vaccination, since figures from the UK show that fully vaccinated and recovered persons are very well protected against the delta variant. It is true that hospitalisations and deaths in the UK have recently risen again. However, they are at a much lower level than at the beginning of the year. There is no threat of overload in the healthcare system; this also applies to the EU as a whole. In any case, it will be difficult for those who have been fully vaccinated and those who have recovered to be forced into quarantine after returning from a country classified as an area of variant of concern if the virus variant in question has also become dominant in the country.

Will delta become a factor in the federal election?

The delta variant could not only shake up the 2021 travel season, but also become a factor in the Bundestag elections. If Germany persists in classifying classic vacation countries with a high delta share as virus variant areas over the summer months, even though the variant is also becoming dominant in Germany itself, this will negatively impact many people's travel plans and/or incur costs. This is likely to affect many families with school-age children who are "holiday-ready" due to the additional burden of the corona crisis. They could ask themselves exactly the question of proportionality and, if necessary, answer it at the ballot box to the detriment of the governing parties, if only by not voting at all.

Lack of protection concepts for schools could further increase resentment

There is also another aspect. Virologists agree that the number of new infections in Germany will rise again in the fall at the latest because of the delta variant. Since by then the majority of adults willing to be vaccinated will have been fully vaccinated and thus well protected, the incidence of infection could be concentrated in schools and daycare centres. While there need not be a full-blown fourth wave of infection or major economic damage, school and daycare operations could be affected. If schools have to return to alternating classes after the summer vacations or even have to close because no other protection concepts have yet been developed and implemented (e.g. air filters), many people are likely to be very displeased. Although education policy is a matter for the federal states, it is uncertain whether voters will differentiate this (possibly after a summer without vacation) in the German federal election.
Originalfassung in Englisch vom July 1, 2021: ˮDelta-Variante: Risikofaktor für Reisesaison und Bundestagswahlˮ