Information
GUEST
You will be logged out of your session in 180seconds due to inactivity.
Continue session
Your session has timed out due to 30 minutes inactivity!
Continue with new session
Advanced Search


Private households in Germany: Regional differences in banking
Jan Schildbach
In the lending and deposit-taking business with retail customers, there are substantial differences between the federal states.
Region
Germany
Periodical
Talking Point
PDF 147K 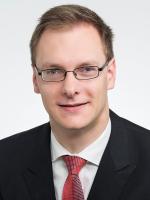 In the lending and deposit-taking business with retail customers, there are substantial differences between the federal states. 30 years after the fall of the Berlin Wall, per capita loan volumes in east Germany are significantly lower than in the west. The latter, in turn, is characterised by a certain north-south divide. Savings banks have a market share of 25-35% throughout the country, whereas cooperative banks have a much stronger presence in the south and west than in the east and north. The large banks achieve an above-average market share of 20-25% in the city states and east Germany. The spread between the federal states is smaller for deposit volumes than for credit volumes. Primarily the savings banks, cooperative banks and other commercial banks have to cope with a considerable deposit overhang and thus an "investment plight" in the negative interest rate environment. In east Germany, the deposit overhang is particularly large. Due to digitisation, changes to the established regional focuses might now be possible. 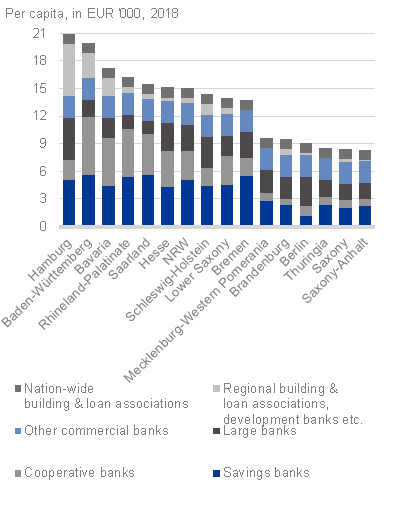 Sources: Bundesbank, Federal Statistical Office, company reports, Deutsche Bank Research
In which federal states have retail customers taken out the highest loans, and from whom? Thanks to the regional banking statistics of the Bundesbank, it is not only possible to identify regional differences in borrowing and bank deposits in Germany, but the data also shed light on regional focuses of the individual banking groups whose reasons in part go back surprisingly far into the past.

30 years after the fall of the Berlin Wall, per capita loan volumes in east Germany are significantly lower than in the west. The latter, in turn, is characterised by a certain north-south divide. Both facts are partly linked to the distribution of income and the cost of living. Savings banks, Germany's number one in retail banking, have a market share of roughly 25-35% in lending throughout the country. Cooperative banks are ranked second, though their market position varies a lot: due to historical reasons, their strongholds are located in the south and west; in the north and east, however, they are only thinly represented. The third-largest banking group are large commercial banks. They have a fairly balanced position nation-wide, but achieve an above-average market share of usually 20-25% in east Germany and the city states.

On the deposit side, the picture is, in principle, similar. Here, however, other commercial banks, which are dominated by direct banks, have outstripped large banks and now rank third in the nation-wide comparison. As regards deposit volumes, the spread between the federal states is, on balance, smaller than with respect to credit volumes. Equally, looking at the different types of deposits, there are no major differences between regions: sight deposits represent the largest block, followed by savings deposits and time deposits, which have suffered a sharp decline.

In retail banking, German banks run a high deposit overhang – an average deposit volume of around EUR 24,000 per capita compares with a loan volume of just around EUR 14,900. In east Germany, the gap is particularly large, which might be explained by pronounced risk aversion or less experience with securities. On the whole, the deposit overhang almost exclusively pertains to savings banks, credit cooperatives and other commercial banks, with the former two running surpluses across all federal states. At the savings banks, the loan-to-deposit ratio is just 52%. Given the ECB's current negative interest rate policy, such an "investment plight" is particularly challenging. At the large banks, on the other hand, loan volumes are higher than deposit volumes in three federal states, at least.
Deposit overhang with private households 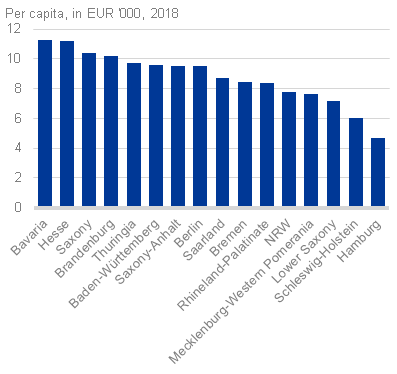 Sources: Bundesbank, Federal Statistical Office, company reports, Deutsche Bank Research
Some regional focuses of individual banking groups have persisted a very long time. In light of digitisation and the decreasing importance of branches, fundamental movements in market allocation might now be possible – for the first time in decades.