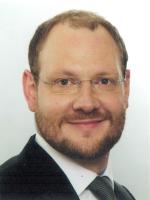 Sebastian Becker
Analyst
+49(69)910-21548
sebastian-b.becker@db.com
www.dbresearch.com
Deutsche Bank Research Management
Stefan Schneider
At the recent meeting of the Governing Council on 7 March 2019, the ECB decided to maintain an extremely expansionary degree of monetary accommodation in future. It now announced to keep target rates at their present extraordinarily low levels at least through year-end 2019 – instead of just "through the summer", as previously pledged. Furthermore, it reiterated that it intends to maintain the huge size of EMU sovereign bond holdings purchased between March 2015 and the end of December 2018 for an incalculable period of time. As a consequence, principal payments from maturing securities bought under the APP (asset purchase programme), including sovereign bonds from the PSPP portfolio (public sector purchase programme) have to be reinvested in full. This ought to support demand for EMU bonds for some time to come, putting downward pressure on yields.
ECB holding more Italian, French and Spanish sovereign bonds than implied by its capital keys 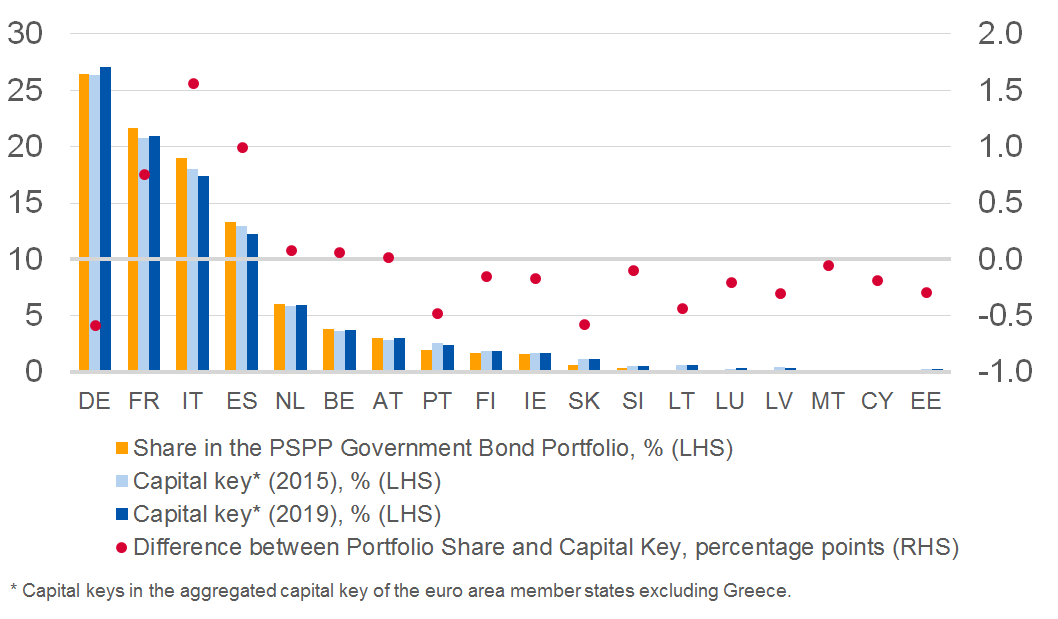 Source: ECB, AMECO, Deutsche Bank Research
Another noteworthy point in this context is the ECB's announcement of 13 December 2018*, in which it stressed that it intends to bring the composition of its PSPP bond portfolio into closer alignment with the national central banks' subscription to the ECB capital key during the reinvestment phase. The respective ECB capital keys were last adjusted on 3 December 2018 (within the scope of the regular five-yearly recalculation). They are computed according to the share of each member state in the total population and aggregated gross domestic product of the EU, with each factor having equal weighting. The new capital keys, which entered into force on 1 January 2019, were calculated on basis of 2016 population figures and nominal GDP at market prices (2011-15 average). Following the recent update of capital keys, Germany, as the largest economy and most populous country, continues to have the highest weighting (18.37% compared with 18% under the old key of 2015), followed by France (14.21% vs 14.18%), Italy (11.8 vs 12.31%) and Spain (8.34% vs 8.84%). Exclusively based on the paid-up subscriptions of the EMU states and leaving aside Greece, which is not part of the PSPP purchases, the relevant shares of the four largest EMU countries for the allocation of the PSPP portfolio are 27.05% (26.33%) for Germany, 20.93% (20.74%) for France, 17.38% (18.01%) for Italy and 12.28% (12.93%) for Spain. This, however, is not in line with the composition of the PSPP portfolio, given the disproportionately high share of Italian, French and Spanish sovereign bonds, whereas that of German debt securities on the ECB's books is too low. For Italy and Spain, the imbalance has aggravated even further, as their weightings for 2019 declined.
Provided the ECB adheres to its plans and brings the respective PSPP portfolio shares into closer alignment with the (new) capital keys in future, it would have to trim back its holdings of Italian, French and Spanish bonds, whilst raising German bond positions. Based on its PSPP sovereign bond portfolio of currently around EUR 1.95 trillion or more than 16% of EMU gross domestic product (February 2019), it would have to reduce its exposure to Italian, Spanish and French government bonds by ca EUR 31 billion (from currently EUR 369 billion), EUR 20 billion (from EUR 259 billion) and EUR 15 billion (from EUR 422 billion), respectively. German bond positions, by contrast, would have to be increased by roughly EUR 11 billion (from EUR 515 billion). With respect to the exact time span of the adjustments, the ECB did not provide any details in its statement of 13 December 2018, but only stated that any adjustment will be gradual and limited temporary deviations in the overall size and composition of the APP portfolio may occur during the reinvestment phase.
But even though PSPP holdings of Italian, French and Spanish sovereign bonds are likely to decline slightly, the ECB will continue to refinance a large share of the annual deficits of debt-stricken EMU states through the reinvestment of maturing securities. Currently, sovereign bonds purchased under the PSPP programme account for around 22% (21.4%) of general government debt (resp. national GDP) in Spain, 15.8% (21%) in Italy and 18.2% (18%) in France.
*See press release “ECB decides on technical parameters for the reinvestment of its asset purchase programme”. December 13, 2018.