WeiterAbbrechen
Erweiterte Suche


Acyclical inflation: What is down must come up?
Brett RyanJustin WeidnerLaura DesplansMatthew Luzzetti
Inﬂation data over the past year – and especially over the past week – have highlighted a critical point.
Region
International
Reihe
Thematic Research
PDF 135K
This is an excerpt of US Economic Perspectives, published on February 18, 2018.

Acyclical inflation: What is down must come up? 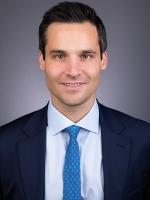 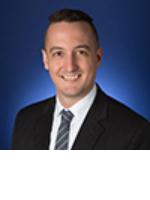 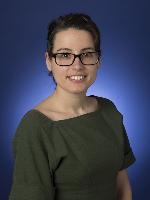 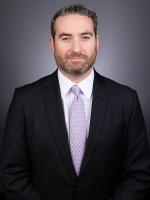 Brett Ryan
Senior US Economist
+1(212)250-6294
brett.ryan@db.com
www.dbresearch.com
Inﬂation data over the past year – and especially over the past week – have highlighted a critical point. Fluctuations in inﬂation rates for items that are typically insensitive to the busi-ness cycle — which we refer to as acyclical, such as health care and apparel — can drive the overall inﬂation trajectory and lead to regime shifts in the market’s inﬂation narrative. The plunge in wireless telephone services prices last March, followed by a string of downside surprises to other acyclical items, spawned a narrative that structural disinﬂationary forces would prevent inﬂation from rising. In the same way, recent stronger inﬂation data led by acyclical items may have revived the narrative that the Phillips curve is, in fact, alive and well and that risks are tilted toward inﬂation overshooting the Fed’s target.
We take a closer look at the behavior of inﬂation for acyclical items over time. Our analysis has three primary conclusions. First, acyclical items are a key driver of the slope of the Phillips curve over time. The Phillips curve “works” during periods when inﬂation for acyclical components rises as the unemployment rate falls, and vice versa. Second, the unemployment rate must be signiﬁcantly lower when acyclical inﬂation is low, as has recently been the case, for the Fed to hit its 2% target. Third, health care inﬂation and the dollar are two key drivers of acyclical inﬂation over time. Periods in which health care inﬂation is high and/or the dollar is weak, tend to be periods where the Phillips curve works.
Although acyclical inﬂation has been low on average over the past several years, there is building evidence that it may be on the verge of rising more sustainably. First, the sharp depreciation in the trade-weighted dollar since its recent highs in early 2017 should help lift import price inﬂation and provide a tailwind to acyclical inﬂation. Second, recent data on health care inﬂation has shown a sharp uptick. If this trend is sustained, acyclical inﬂation will rise, helping to drive core inﬂation higher, eventually overshooting the Fed's target as our forecast implies.
Shifts in the behavior of acyclical components are a key driver of the Phillips curve relationship over the time 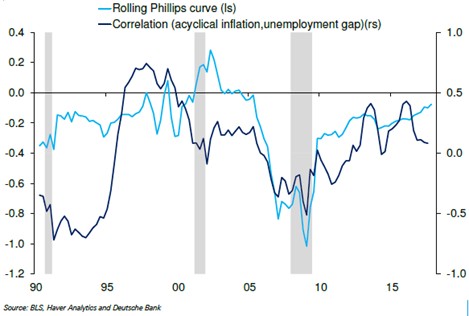