A mixed picture at sectoral level 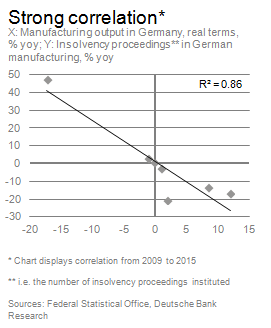 A look at the large sectors of industry reveals that in 2009, a year of recession, the increase in insolvency proceedings was the most pronounced for automotive including component suppliers (up by 222%), rubber and plastics (up by 88%), mechanical engineering (up by 85%) and metal (up by 83%). That same year also saw disproportionately strong decreases in domestic output for each of these sectors. The aforementioned appreciation of the euro adversely affected the automotive and mechanical engineering sectors, which are particularly export-driven. All sectors then experienced two years of – in some cases significant – falls in the number of insolvencies, thereby reflecting the trend in manufacturing as a whole. However, the food industry exhibits a different trend, with the number of insolvency proceedings in fact declining by almost 8% in 2009. The recession in Germany did not lead to a rise in insolvencies in the food industry because the price elasticity of demand for food is low. The exchange rate is also less relevant. Nonetheless, the number of insolvencies in this industry went up slightly in 2010. 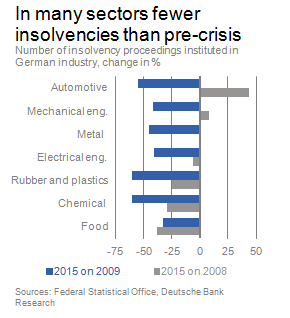 There is no consistency to the pattern of the number of insolvencies across all sectors of industry in the years 2012 to 2015. Only the general trend pointed in the same direction: in 2015, the number of insolvencies was below the 2009 level across all sectors. And this is also true for most sectors when the number of insolvencies in 2015 is compared with those in 2008. However, there are a number of notable exceptions. The number of insolvencies in the automotive industry in 2015 was still more than 43% higher than in 2008; the corresponding number for the mechanical engineering sector was more than 8% higher. The number in the metal industry in 2015 was almost as high as in 2008. To be fair, an assessment of the number of insolvencies in the automotive industry needs to take into consideration that, in absolute terms, there were only 33 insolvency proceedings instituted in 2015 and thus 'only' ten more than in 2008.
A final look at the insolvency ratios in 2015 reveals that, among the major sectors of industry, mechanical engineering was above average at 0.91%. By contrast, the construction materials industry (0.36%), the pharmaceutical industry (0.43%) and the chemical industry (0.55%) registered relatively low insolvency ratios.
Overall, the impact of the global economic and financial crisis on the insolvency statistics for German industry has now largely dissipated. In 2015, almost all sectors reported fewer insolvencies than in 2008. The prospects for a further fall in insolvencies in German industry in 2016 are good. And indeed, the number of proceedings instituted in the first quarter was almost 5% down on the corresponding prior-year period. Nevertheless, risks still remain. These include the appreciation of the euro and – very much related to this – an economic slowdown. Both of these risks have increased following the vote for Brexit.
Original in German published on July 18, 2016: ˮWeniger Insolvenzen in der deutschen Industrieˮ