ContinueCancel
Advanced Search


European banks: Shrink to (pro)fit
Jan Schildbach
The major European banks have seen their revenues stabilise in 2017, and through further cost-cutting and improvements in asset quality, their profitability rebounded strongly to the second-best figure in the past decade.
Region
Europe
Periodical
Talking Point
PDF 106K

Jan Schildbach
Analyst, Team Head
+49(69)910-31717
jan.schildbach@db.com
www.dbresearch.com
Deutsche Bank Research Management
Stefan Schneider
The major European banks have seen their revenues stabilise in 2017, and through further cost-cutting and improvements in asset quality, their profitability rebounded strongly to the second-best figure in the past decade. However, banks continued to shrink, and both total assets and risk-weighted assets fell substantially. This helped capital and leverage ratios to reach new record highs, finally laying questions about the sector’s capitalisation levels to rest, at least on aggregate. Large European banks lost ground versus smaller competitors and also remained far behind their US peers, although they were able to catch up somewhat on this front.
In 2017, the European banking sector achieved its second-best result since the financial crisis (bar 2010). Bottom-line profitability at the 20 leading institutions, which are a good proxy for the entire market, more than doubled year-over-year to EUR 69 bn. This is still nearly 50% below the peak 2006 level, but far above the gloomy results of 2011-13 or 2016. The stronger performance was hardly driven by a brighter revenue picture though: net interest income was down another 1% yoy, fees and commissions were up 3% and trading income up 4%, pushing total revenues 0.7% higher. This is below inflation and economic growth rates in the main markets, marking a deterioration in real terms. What is more, it comes after a 6% slump in 2016. Hence, banks are still waiting for a rebound on the income side.
Net income of the top 20 European banks 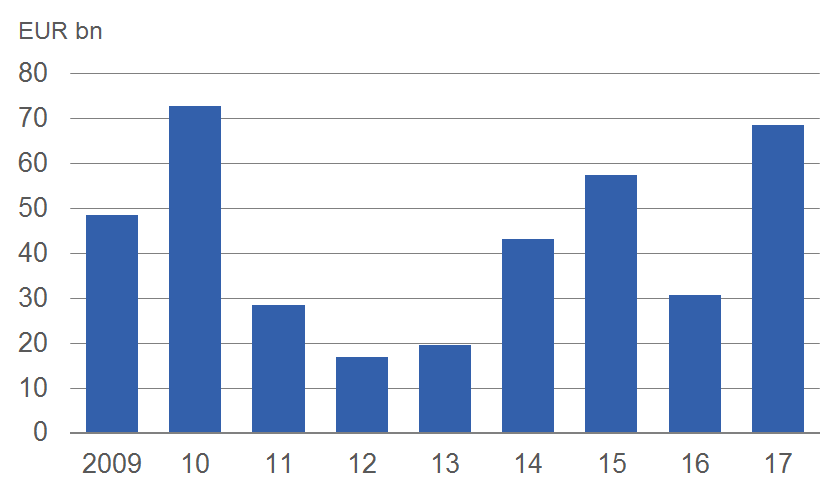 Sources: Company reports, Deutsche Bank Research
The main reasons for the improvements were strict cost control, lower litigation expenses and, once again, lower loan loss provisions. Banks cut administrative expenses by a solid 5.5%, and provisions fell by 25%. The year before, large writedowns on bad loans had still been a burden, especially in Italy. A few banks were even able to release reserves on a net basis, i.e. loan loss provisions added to rather than reduced net income. Combining slightly higher revenues and a meaningful drop in expenses, the cost-income ratio decreased by 4 pp to 63%.
Despite the return to robust profitability (and several capital raises in the course of the year), banks’ equity base did not rise significantly. Total equity capital was up by less than 1%, or just EUR 9 bn (after a contraction in 2016), partly due to increased dividend payments to shareholders. But de-risking continued unabated, with risk-weighted assets 5% lower than 12 months before. This helped further strengthen the core, fully loaded CET1 capital ratio by an impressive 1.3 pp yoy to 14.2% on average. The fully loaded leverage ratio climbed 0.4 pp to 5%. Hence, a decade after the financial crisis, capital concerns are largely resolved at long last. Liquidity is not an issue either, with the Liquidity Coverage Ratio (LCR) reaching 148% on average (+7 pp). It is now reported by almost all institutions.
Remarkably, large banks continue to lose market share versus smaller competitors. Granted, total assets are not a particularly precise measure of bank size, yet they still provide useful insights: the top European banks’ balance sheet total was down again in 2017, by 4% yoy. On the other hand, total assets of the whole EU banking sector were essentially stable last year, benefiting from a moderate expansion in lending to the private sector (+2%). Overall, the largest banks have seen their balance sheet shrink by 14.5% since 2011, while for all EU banks, the decline has been less pronounced at only -7%.
How does European banks’ 2017 performance compare to that of their US peers? Banks on the other side of the Atlantic have been posting all-time high (nominal) net income for several years. Not so for 2017, when it fell 3.5% yoy to USD 165 bn for the entire industry (which is roughly the same size as the top 20 European banks). However, the sole reason was the large-scale tax reform pushed through in December, which led to an aggregate negative impact on bank profits of USD 17 bn. Without this one-off hit, US banks would have basked in another set of record results. From that perspective, European banks still have a long way to go, despite the several steps forward which they made in 2017.