Jan Schildbach
Analyst, Team Head
+49(69)910-31717
jan.schildbach@db.com
www.dbresearch.com
Deutsche Bank Research Management
Stefan Schneider
European banks had a patchy start to the year. The common theme of Q1 performance was the continued slight shrinkage of the industry, visible in many core indicators. Overall results were solid though, showing further progress in asset quality and resilience in light of tighter regulation (IFRS 9).
Most of the main P&L and balance sheet figures at Europe’s 20 largest banks declined modestly year-over-year in Q1 2018. Revenues fell 2% on aggregate, as net interest income was down slightly (1%), fees and commissions decreased by 3% and trading income suffered from a less buoyant capital markets environment than 12 months ago (-9%). However, banks also managed to keep down costs, although administrative expenses fell by only a modest 1%. A bigger positive impact came from loan loss provisions, which slumped another 20%. This is somewhat surprising given that they had already declined by more than half over the last four years to the lowest level since 2006. With interest rates possibly rising from next year on, loan losses are probably close to their trough though. All in all, this led to a small increase in banks’ profitability, with net income up 4%.
Total banking sector assets 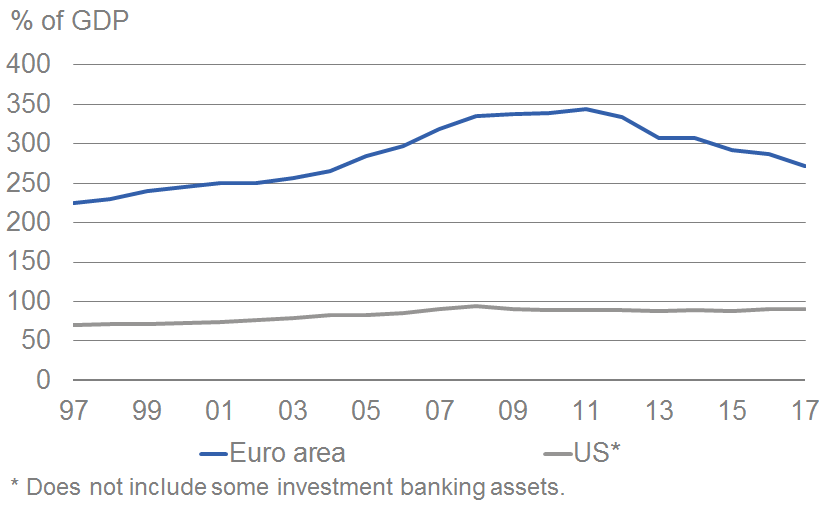 Sources: FDIC, BEA, ECB, Eurostat, Deutsche Bank Research
In line with the decline in most P&L items, the industry’s balance sheet also continued to shrink. Total assets were 3% lower than in March 2017, risk-weighted assets down by 2% and total equity by 1%. The latter showed remarkable resilience in light of the introduction of the new accounting standard IFRS 9, which requires banks to bring forward provisions by shifting from an incurred loss to an expected loss model. IFRS 9 thus triggered a one-off jump in the stock of loan loss provisions, which was booked through the balance sheet (as a hit to the equity base) rather than the P&L as usual. Capital ratios suffered a bit from the reduction in banks’ equity, with the fully loaded CET1 ratio declining 0.5 pp since the end of 2017 to 13.7% on average. Nevertheless, the ratio is still 0.7 pp higher than 12 months ago. Likewise, the fully loaded leverage ratio reached 4.8% (+0.2 pp yoy) and the Liquidity Coverage Ratio (LCR) a strong 148% (+5 pp). With most banks solidly profitable, capital returns to shareholders have inched into the spotlight. When the sector stops shrinking and starts growing again, this may turn into a tricky task for banks: on the one hand, they will then have to generate capital organically (which they have found difficult to do in the last few years) to fund this growth. On the other hand, one of their priorities now is to satisfy disgruntled owners after a long period of meagre returns.
Speaking of shrinkage and growth: as European banks have mostly been busy with shedding assets and reducing risks since the financial crisis, the industry’s size relative to the overall economy has dropped substantially. Total assets of all euro-area institutions were just 272% of GDP at the end of 2017, compared to their peak of 344% in 2011. This is due to real growth in the economy, modest inflation and a nominal decline in banking sector assets. Are there signs of this changing any time soon? At least banks’ capital issues have broadly been resolved, eliminating one major obstacle. And private-sector lending might still accelerate further in the next few quarters, provided the macroeconomic situation remains favourable. If a full-blown global trade war and a hard Brexit can be avoided, household lending (currently +2.6% yoy in the EMU) and corporate lending (+1.0%) could have significant upside potential.