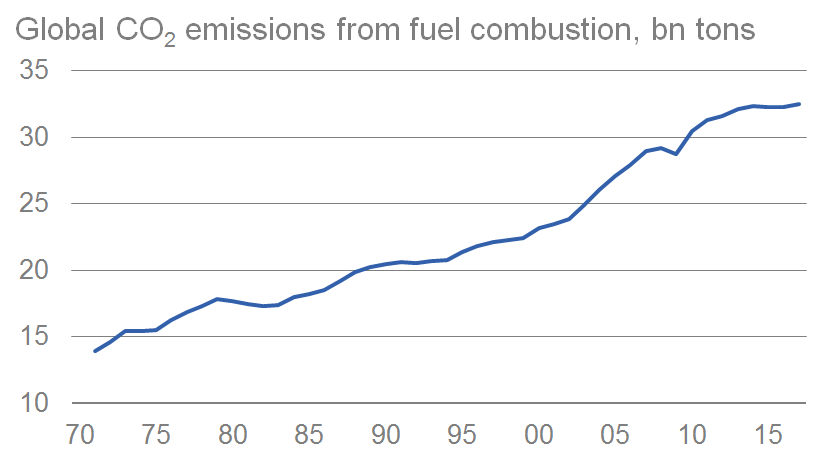 Source: IEA
However, neither the most dire warnings nor well-sounding declarations of intent have been able to prevent the uptrend in global carbon emissions so far. Still, the rate of increase has recently slowed, and there have been more years in which global carbon emissions stagnated even though there was no recession. To some extent, this is due to the fact that many countries are shifting from coal to gas (sometimes from unconventional sources) and renewable energy power. In addition, the average carbon intensity of power plants and vehicles in important economies has declined. Nevertheless, the general trend is clear. The International Energy Agency (IEA) assumes in its baseline scenario that global carbon emissions will grow at a rate of 0.4% per year until 2040. This would, in fact, be a huge improvement over the first decade of this century, when global energy-related carbon emissions increased by almost 2.8% per year. The IEA scenario is based on considerably higher investment in renewables (more than USD 300 bn per year) and energy efficiency (considerably above USD 400 bn per year) until 2040 than is currently made.
The message from this forecast is quite inconvenient. It seems that even the huge investments assumed by the IEA will not be sufficient to supply a global population that is increasing by 80 million each year with the necessary energy (heating, mobility, power) and reduce global carbon emissions palpably at the same time. In other words: the “new” renewable energy sources (wind and solar power) are obviously not powerful enough. According to the IEA scenario, their share in global primary energy demand is to grow from currently c. 2% to only 7% by 2040. Wind and solar power are not adjustable at will. Depending on where wind and solar plants are located, their capacity utilisation is extremely low. Cost-efficient and large-scale storage technology is not in sight. That means that it will still be necessary to produce power from controllable sources, which can be relied on if the wind does not blow or the sun does not shine. These additional (and often underused) capacities will cause additional expenses, both for individual companies and at a macro-economic level. And these costs are often forgotten because people focus on the decline in pure costs for renewable power generation.
Fossil energy sources will remain dominant in the long term 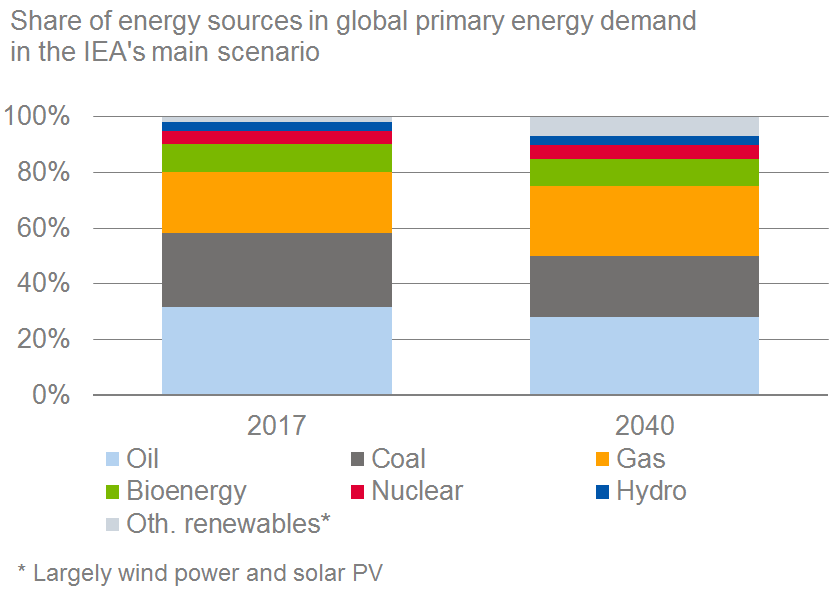 Source: IEA
Who will call for sacrifices?
If we accept the IEA scenario as roughly plausible, the resulting message is highly inconvenient again. The technologies which are available today and in the foreseeable future will, in all probability, prove insufficient to counteract climate change to the necessary extent and with the necessary speed and, at the same time, allow households to stick to their consumption patterns and continue with the well-established division of labour along international production chains. In all probability, this is true even if the focus of climate protection measures shifts towards the cheapest options to avoid carbon emissions, i.e. if the economic efficiency of climate protection policy is increased.
Policymakers are understandably reluctant to make a clear case for unpopular sacrifices. However, neither citizens nor companies are likely to change their consumption and production patterns to the extent that would be necessary to reach the goal of limiting global warming to 2 degrees centigrade. Higher energy taxes or considerably stricter laws (for example a ban of climate-damaging technology or an obligation to use certain climate-friendly technologies) would probably be required. However, the “yellow vest” protests in France have shown just how difficult such steps may be. After all, a comparatively small increase in fuel taxes was one trigger for the demonstrations.
So far, there has not yet been a democratic discussion about which costs and restrictions (in terms of freedom of choice and vested rights) households and companies would be willing to accept to help reduce greenhouse gas emissions; in any case, the per-capita contribution would be minimal. Political calls for better climate protection are much too vague. An economic and social issue of this importance should be discussed in more concrete terms, for example by explaining clearly what it would mean for Europeans to reduce greenhouse gas emissions by 80 - 95% by 2050 (compared to 1990). While it is, of course, impossible to forecast all consequences in detail, a simple calculation helps to get an idea of the enormity of the task. If the European OECD countries reduced their per-capita carbon emissions “only” by 80% by 2050, their emissions would be 20% below the current per-capita level of India. And it is quite superfluous to point out that India’s per-capita GDP, consumption, traffic and heating needs are considerably below the European level.
Particularly those political forces which warn loudest about the negative impact of climate change should try and not gloss over the most inconvenient message: sacrifices will be necessary.
Original in German published on December 14, 2018: ˮUN-Klimagipfel: Die unbequemste Botschaft fehltˮ