Jan Schildbach
Analyst, Team Head
+49(69)910-31717
jan.schildbach@db.com
www.dbresearch.com
Deutsche Bank Research Management
Stefan Schneider
Banks in Europe face a more difficult business environment in 2019 than last year. While the macro environment is still decent, momentum is cooling markedly. In addition, prominent political risks loom dangerously. On the operating side, banks are treading water. Their limited cost savings are being fully absorbed by declining revenues, and balance sheets continue to shrink despite a moderate pickup in lending. Profitability and capital levels are both stagnating. Only in a benign economic and political scenario will banks be able to return to growth this year.
Despite a more or less solid macroeconomic backdrop in Europe as well as most of their overseas markets, European banks are still unable to shift into higher gear. In fact, they even struggle to maintain the dissatisfactory status quo as the results of the 20 largest institutions for the first nine months of last year show. 2018 was the sixth year of economic expansion in the euro area and the ninth year in the US. Real GDP may have grown by 1.9% and 2.9% yoy, respectively, and unemployment is at multi-year lows. Strikingly, however, banks’ business is shrinking even in nominal terms. Total revenues were down 1% yoy, driven by across-the-board declines in net interest income (-1%), fee and commission income (-2%) and trading income (-11%). Cost-saving initiatives had some success, as administrative expenses fell by 1%, too. The belt tightening of the past few years notwithstanding, costs still remain higher than in 2010 (which was the best year for European banks post the financial crisis). The currently overall robust performance of the European economy is reflected in further improvements in asset quality, with loan loss provisions down another 27% from a low prior-year figure. Yet all in all, a weak third quarter erased the progress made in H1 2018 in terms of profitability (net income -1% in the first nine months).
Administrative expenses of the major European banks* 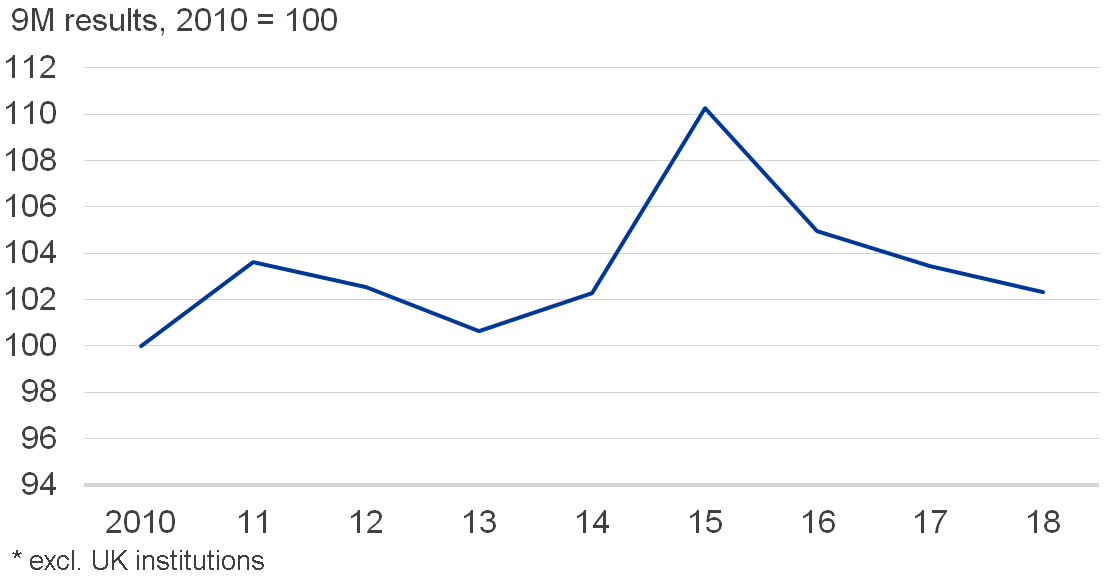 Sources: Company reports, Deutsche Bank Research
Balance sheet trends are similar to those in the P&L. Total assets declined 1% yoy, while risk-weighted assets were essentially the same as a year ago. This is somewhat remarkable given that lending to the private sector in the euro area (and particularly companies) picked up moderately in the course of last year and outstanding volumes were up 2½% yoy in September. But banks continue to shed bond holdings and derivatives positions. Equity capital fell by 2%, not least because of the impact of the first-time application of IFRS 9, which led to a one-off increase in loan loss provisions that was booked against total equity. Nevertheless, the 0.3 pp yoy reduction in the fully loaded Basel III CET1 ratio to 13.8% was a clear setback. Things look slightly better on a non-risk-weighted basis – the fully loaded leverage ratio was stable yoy at 4.8% on average, whereas the Liquidity Coverage Ratio (LCR) climbed 3 pp to a strong 148%. On aggregate, capital ratios remain well above regulatory requirements and are broadly on a sustainable level. Some individual banks, though, cannot afford slippage in their efforts to build buffers for tougher times.
This is especially true given that an economic slowdown is already visible. GDP growth in the euro area is expected to drop to 1.2% this year, compared to 2.5% in 2017. Furthermore, this baseline scenario does not include risk factors such as a chaotic no-deal Brexit or an escalating US-China trade war, both of which loom quite large currently. A materialisation of one of these risks could indeed trigger the next recession in Europe or the US, with the economies already late in the cycle. It is hard to say how these risks – which to a large extent are political – will play out. On the one hand, if they materialise and put the brakes on the economy, this would strain European banks’ efforts to stabilise revenues and also lead to a pickup in loan loss provisions. In countries where the sovereign-bank nexus is still strong, it might even trigger a renewed government debt crisis. On the other hand, a resolution of these risks could provide a boost to banks by strengthening credit demand and allowing central banks to continue their exit from loose monetary policy. In a positive scenario, the banking sector might be able to make more visible progress.
Online Document "PROD0000000000446945" not found.
7.6.3