Eric Heymann
Analyst
+49(69)910-31730
eric.heymann@db.com
www.dbresearch.com
Deutsche Bank Research Management
Stefan Schneider
Despite broad-based weakness in recent months, the stock of orders in German manufacturing remained on the uptrend, partly led by the lack of skilled labour and one-off factors in the auto industry (WLTP, diesel). Whilst the high volume of unfilled orders should stabilise industrial production in the current year, the peak ought to be near, as suggested by recent results of the ifo business survey. On balance, manufacturing production in Germany looks set to be virtually flat in 2019.
Unfilled orders in German industry: Near their peak 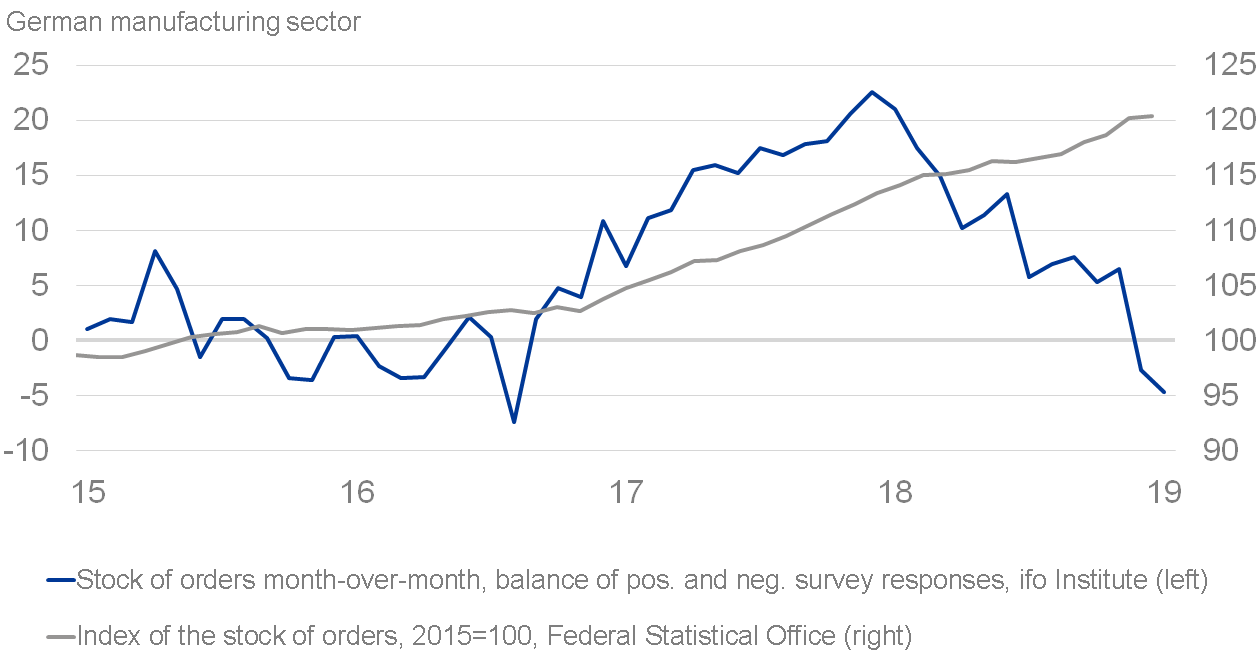 Sources: ifo, Federal Statistical Office, Deutsche Bank Research
Recent economic data in Germany was lacklustre. In the fourth quarter of 2018, real GDP stagnated compared with the previous quarter. With zero growth following a slightly negative reading in the third quarter, Germany only narrowly escaped a technical recession.
Manufacturing, in particular, has lost considerable steam in recent months. Starting 2018 on a relatively solid footing, industrial production pointed to the downside in the second half of the year, largely driven by the WLTP effect in the auto sector. Order intake also slipped in the course of 2018, and was down slightly on 2017 in annualised terms. Moreover, capacity utilisation in manufacturing is declining for the fourth consecutive quarter in Q1 2019, and business expectations in industry were negative at the beginning of the year.
In view of current disappointing data, a positive case is that, as reported by the Federal Statistical Office, the stock of orders in manufacturing has continued to rise steadily. On the surface, the high volume of unfilled orders may seem surprising, given weak economic figures, but there are grounds for the uptrend:
In the long-term comparison, the reach of orders is currently at high levels, which should stabilise industrial production over the next few months. However, with the view of companies in the ifo survey deteriorating over the past two months with respect to month-over-month growth of their order backlog, a quick solid recovery of industrial production also seems unlikely. The upshot is that unfilled orders in manufacturing may be at their peak. From the current perspective, we expect real industrial production in Germany to be virtually flat in 2019.
Original in German published on February 19, 2019: ˮAuftragsbestand in der deutschen Industrie: Höhepunkt in Sichtˮ
Online Document "PROD0000000000446945" not found.
7.6.3