Eric Heymann
Analyst
+49(69)910-31730
eric.heymann@db.com
www.dbresearch.com
Deutsche Bank Research Management
Stefan Schneider
Although the negative effects from the WLTP roll-out are currently petering out in German auto statistics, the recent weakness of global demand argues against a swift recovery of auto production in Germany. In 2019, passenger car sales look set to shrink slightly or at best stagnate in some key markets (US, EMU, UK), whilst rising only moderately in others (China). A rebound is unlikely to materialise before H2 2019, when output is also expected to turn positive in year-over-year terms. Going by the production index, annualised automotive output in Germany ought to be more or less flat in 2019, in our view.
The new WLTP (Worldwide Harmonized Light Vehicles Test Procedure) emissions regulations taking effect on 1 September 2018 have left deep marks in German auto statistics in the secon d half of 2018. As a result, real domestic auto production (production index) plummeted sharply. In the third quarter alone, it was down by 8% in real terms compared with the second quarter, which marks the strongest quarterly decline since the recession at the turn of 2008/09. In Q3, auto manufacturers had to halt production, as certifications had not yet been obtained for a large number of models, whilst other OMEs did not request WLTP approval for vehicles that were at the end of their life cycle and ceased production until the new models were being rolled out.
Recovery at year-end

Source: Federal Statistical Office
Moreover, incoming auto orders also went into reverse in the first three quarters of 2018. The weakness can to some extent also be linked to the WLTP effect, as customers were waiting for certifications before ordering their vehicle of choice.
The adverse effects of the WLTP roll-out are now petering out in auto statistics. Following the drop in the preceding quarters, a slight countermovement materialised in domestic production in Q4, and incoming orders were up quite sharply in the final quarter of 2018 – albeit from low levels. The rebound of order intake can in part be traced to the higher supply of passenger cars with Euro 6d-TEMP emission standard; these cars would not be subject to potential driving bans. In January, however, orders suffered another setback (-6.1% mom).
Strong rebound unlikely given weak global demand
Although the WLTP effect is expiring, auto output is unlikely to muster a clear rebound in the short term. At the start of the year, German auto sector production was, for instance, adversely affected by the strikes at a Hungarian motor engine plant. Whilst such one-off factors should not be overrated, it was not a good start to the year for German automotive industry. More importantly, however, passenger car demand in many key markets has been on the decline since year-end 2018. In the months ahead, the weakness is likely to continue. In cumulated terms, monthly car sales in China, the US, the euro area and the UK have been down on the same period a year earlier since September 2018. In 2018, these four markets accounted for around 63% of the total value of German automotive exports.
Weak global car demand weighs on German auto exports

Sources: ACEA, Bureau of Economic Analysis, China Automotive Information, Federal Statistical Office
The current weakness of demand can be primarily traced to "normal" cyclical reasons. Despite the second-quarter soft spot, new car registrations in the euro area rose for the fifth consecutive year in 2018 and are now near their pre-crisis level. Against this backdrop, a flattening or slight contraction of demand in 2019 would be far from dramatic. With light vehicle sales in the US at high levels since 2015, further growth potential is becoming limited, the more so as financing conditions have deteriorated, led by higher interest rates. A key risk for German auto exports to the US is the possible introduction of US import tariffs. Whilst the likelihood of such a scenario seems to have declined of late, the statements from the US administration should be taken with a grain of salt, as regards this issue (and others).
In the UK, new car registrations in 2018 decreased for the second year in a row, due to the economic slowdown, sterling's weakness and the uncertainties surrounding the Brexit resolution. In absolute terms, however, sales were still near the long-term average, as demand declined from a record high in 2016.
In China, car sales were also down in 2018, for the first time in this century. The deceleration can in part be linked to fiscal incentives for specific vehicles, which pushed up sales in 2017 due to front-loading effects. In 2018, there were speculations about further tax cuts. Though these have not (yet) come to fruitition, these discussions may have been the reason why some potential buyers have been postponing purchases. As replacement purchases are accounting for an increasingly higher share of total car sales, phases of cyclically-induced weak demand ought to increase in the years ahead. At year-end 2018, the value of German car exports already declined, led by the slowdown of global demand.
Demand unlikely to pick up before H2 2019
Production and capacity utilisation at low levels of late

Sources: ifo, Federal Statistical Office
On balance, annualised passenger car sales in 2019 ought to shrink slightly or at best stagnate in some of the above-mentioned markets (US, EMU, UK), whilst rising only moderately in others (China). Should the Chinese government reintroduce tax breaks, growth in China would surprise on the upside. If, however, these incentives are still restricted to cars with relatively small engine size, auto production in China (including local output of German carmakers) would be the main beneficiary, rather than German exports to China.
Although dynamics in the above-mentioned markets will be gathering steam over the course of the year, with momentum in H2 stronger than in H1, trees will not grow into the sky for German car exports. It would actually be good news if the value of exports stagnated in annualised terms. As regards ifo export expectations, positive and negative views of German auto manufacturers were on average more or less balanced in recent months.
Seasonally-adjusted domestic auto production is unlikely to point to the upside in the first half of 2019. At the beginning of Q1, capacity utilisation in the sector was at relatively low levels. For H2, a moderate uptick in production could be in the offing. In the year-over-year comparison, the pattern would also be binary. Whilst auto production in H1 ought to decline over the same period a year earlier, it looks set to rise markedly versus the same period a year ago in H2, not least because the WLTP effect dragged down output in the past year. For the full year, we expect real automotive production in Germany (production index) to more or less stagnate. In terms of the units produced, however, a negative result seems to be on the cards. According to recent press reports, the VDA German Association of the Automotive Industry expects domestic unit passenger car production to shrink by 5% in 2019.
Strong qualitative growth 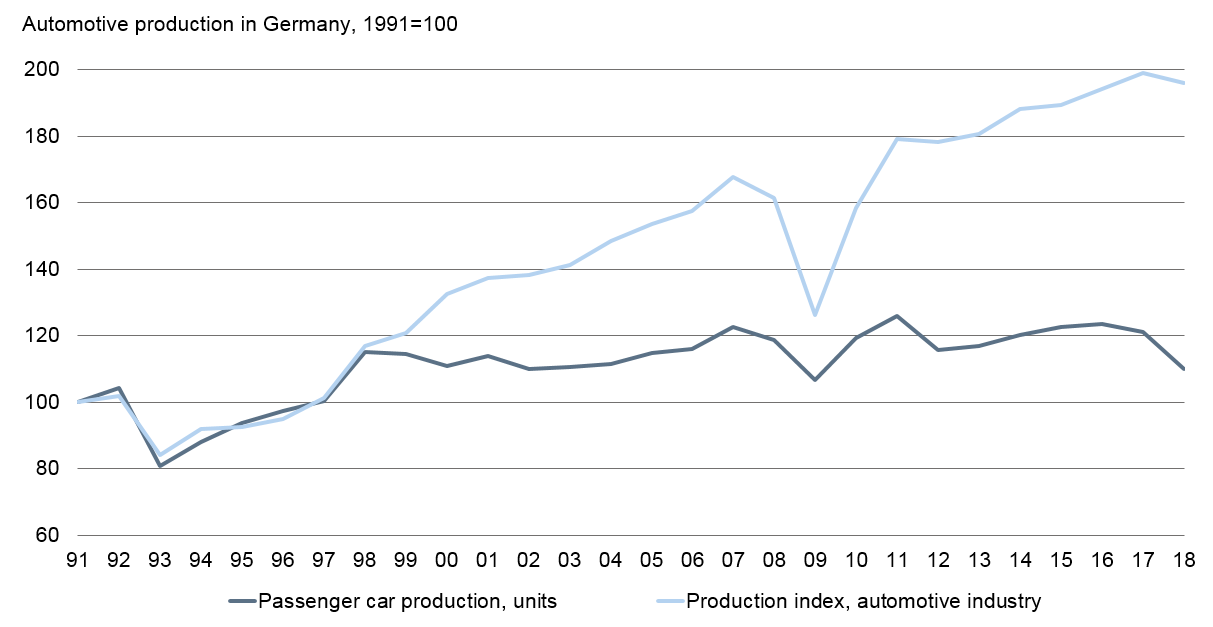 Sources: Federal Statistical Office, VDA
The current trend would hence continue, with the real production index, which also encompasses qualitative components (i.e. better equipment of vehicles) on average clearly outperforming unit production. In 2018, the production index was up by 96% on 1991, compared with an increase of just 10% in unit passenger car production. But, of course, the production index is a far more meaningful indicator for the auto market’s performance than unit output.