Initial US bank performance in the corona crisis 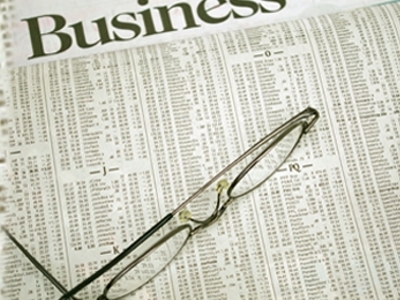 The economic slump is taking its toll on the banking industry. For the major US banks, profits in Q1 more than halved compared to the prior year, as loan loss reserves jumped. Revenues declined moderately with weakness in interest income and fees and commissions partly compensated for by a jump in trading income. Deposits, loans and other assets surged because clients hoarded liquidity. Banks’ capital ratios fell only somewhat and they remain well capitalised. Banks in Europe may have faced similar trends overall but will probably have benefited less from the supportive trading environment and suffered more from declining capital ratios. They are also handicapped by their much lower starting level in terms of profitability.
US banks’ results for the first quarter 2020 offer a first glimpse of the heavy impact of the corona-induced recession on the banking sector. On balance, the seven largest institutions reported a drop in net income of 58% year-over-year, to USD 14 bn. At least, all banks remained profitable. The slump was almost entirely due to a surge in credit loss provisions which rose to USD 26 bn, i.e. 4½ times the level a year ago. Revenues suffered also, falling 3% to USD 114 bn but this masks diverging trends: on the one hand, a recent deterioration in many business segments, from a slowdown in M&A advisory to lower asset management fees and pressure on net interest income. The latter had already been visible for some time since the Fed started cutting rates in summer 2019, but in Q1 it slashed them to zero. Some banks also took write-downs on securities and short-term bridge loans. On the other hand, debt and equity underwriting performed well and trading activity during the market crash in March was exceptional, which strongly lifted banks’ trading income.
Likewise, on the balance sheet, there were some extraordinary movements. Over the last three months alone, i.e. not annualised, total assets jumped by 10% to USD 12.5 tr on aggregate, driven by surging trading assets, higher interbank deposits and a substantial increase in loans (up 5 ½%) as – mainly corporate – customers drew down credit lines. At the same time, there was an enormous inflow of funds into the banking system, with deposits rising 11% as customers became more risk averse and cut back spending and investments, but also liquidated risky assets such as stocks.
Q1 results of the 7 largest US banks 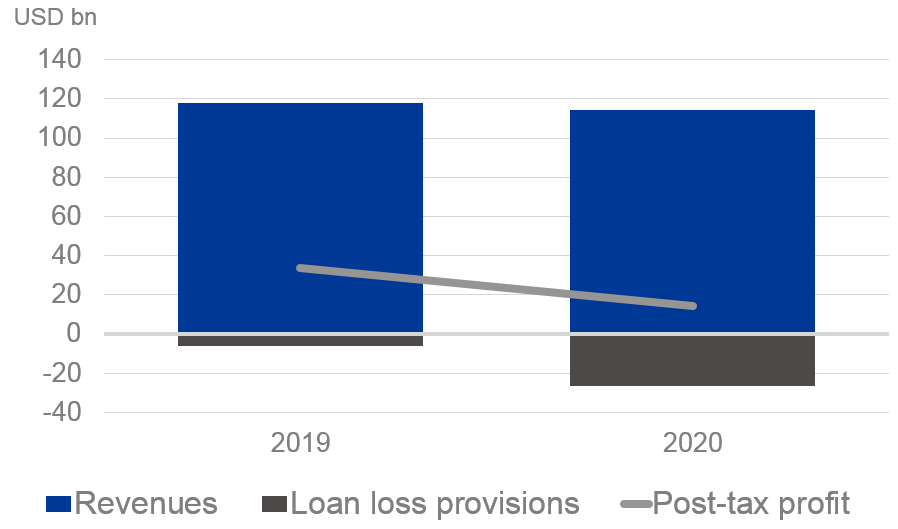 Sources: Company reports, Deutsche Bank Research
In times of crisis, capital and liquidity are particularly in focus. At the top US banks, since year-end 2019, the fully loaded CET1 ratio declined 0.6 pp to 11.5% (unweighted average). Though the level is not outstanding, the only moderate contraction in such a quarter is a sign of strength. Usually, the banks follow the capital ratio under the standardised approach of Basel III which tends to be lower than under the advanced approach, as the lower of the two ratios is the binding one according to US regulation. In the recent quarter, however, at some institutions, the advanced approach capital ratio dropped below the standardised approach ratio. Similarly to CET1, the leverage ratio dipped 0.2 pp compared to December, to 6.6%, which is still a very robust figure. In addition, from Q2 on, banks will benefit from relaxed rules that temporarily exclude US Treasuries and deposits at the Fed from the leverage ratio denominator. Liquidity-wise, although disclosure remains somewhat patchy, the large banks seem to operate with sizeable buffers and the LCR in some instances even increased during the quarter.
What do the results imply going forward?
Finally, what do the US results signal for banks in Europe? While many of the same effects will play out here as well, there are a number of important differences:
All these effects point towards (at least initially) weaker bank performance in Europe. Importantly, however, this comes on top of the decade-long divergence in banks’ fortunes on both sides of the Atlantic. US banks had become much more profitable than their peers in the Old World. The current crisis may therefore pose a significantly greater threat to European than to US banks.
Online Document "PROD0000000000446945" not found.
6.4.1